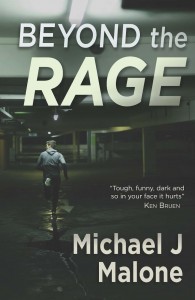 Michael J. Malone’s Beyond the Rage is one of those novels that keeps you thinking long after you turn the last page. Its hero, Kenny O’Neill, made appearances in Malone’s previous books in the DI Ray McBain series (Blood Tears and A Taste for Malice).

Kenny, a successful criminal with friends in many places, is an unlikely hero. He’s a good bad guy, one who struggles to make sense out of senseless violence while avoiding the memories of a troubled childhood.

Kenny’s father abandoned him shortly after his mother committed suicide when he was 12-years-old, at which time his mother’s sister and her husband took him in. Now, however, family secrets  have surfaced and Kenny is determined to find out the truth about his father … and what really happened to his mother.

But Kenny get gets sidetracked from his mission when his girlfriend Alexis, a high-class escort, is attacked. Kenny’s attempt to hunt down her assailant is thwarted repeatedly because Alexis refuses to provide details about the man who brutalized her. As Kenny  copes with his frustration and mounting anger, he begins to wonder who he can believe, who he can trust, and why no one wants to tell him what really happened–both in the recent past and all those years ago.

Malone paints his characters with vivid strokes of genius and slashes of colorful dialogue. He also mixes reality with dashes of fantasy and encourages us to believe Kenny probably isn’t going to find his happily-ever-after while at the same time persuading us to have hope. Malone’s plotting is brilliant and the story’s ending is sure to be a surprise.

Michael J. Malone is a novelist, poet, blogger, and reviewer. He can be found on Facebook, his blog May Contain Nuts, and on Goodreads. His books are available in the U.S. via the Book Depository, which provides free shipping.