Christy Dorrity is a champion Irish dancer and writer whose debut novel, Awakening, was just released. She was kind enough to share her response to the question most writers hear more times than they care to: “Where do you get your ideas?”

The answer is from everywhere. A spark of a new idea comes from something a three-year-old says while playing, from other books and movies, and sometimes from dreams.

For me, one of the most fertile grounds for creating fantastic worlds and far-off lands comes from what is already here. Have you ever seen an octopus that can change color and texture to blend into his surroundings? Did you know that there are people who truly believe that faery folk exist? Have you ever really thought about the fact that giant lizards used to rule the earth? Did you know that technology has produced a 3-D printer that prints ears, livers, and kidneys with living tissue?

The world around is so fascinating that I don’t have to go far for ideas.

World mythology is one of those sources of potential for world-building and plot ideas. When I began researching Celtic mythology for AWAKENING, I was amazed at the rich culture and limitless idea-hatching possibilities. Mythology is filled with Hags who pronounce curses, men who turn into beasts in battle, and star-crossed lovers who are destined for heartache. You can’t ask for better material. 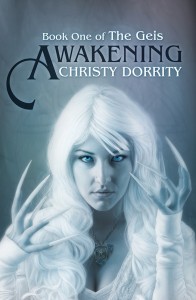 Take Cliona, the banshee in my book. When I did research on the legends surrounding banshees, I found very little. She is in spirit form, and often attaches to a certain family, warning them with her wail that a death is about to occur. Travelers are warned not to pick up a lost comb; the banshee who often combs her hair by a stream may have left it behind. Some have seen the banshee washing bloody clothing in the river. By some versions she is beautiful, by others, she is frightening.

In creating Cliona, I took what was already there and built on it—giving her motivations and a relatable backstory, while keeping true to original mythology. The elements are all there—the comb, the wail, the wraithlike figure, but the extrapolations are what give my story life.

The make-believe stories that come from an author’s brain are really just an extension of the fascinating facets of the world around us. It’s like Captain Hook says, “Lie? Me? Never. The truth is far too much fun.”

Awakening is now available on Amazon.