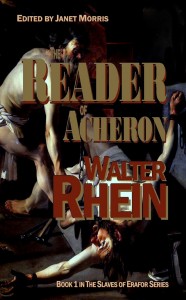 Walter Rhein’s latest release, The Reader of Acheron, is a heroic fantasy in a post-apocalyptic setting where slavery is commonplace and reading is outlawed.  It’s a dark fantasy novel with mature, ambitious themes.

Walter has also recently released a reprint of a fantasy series that has been getting some great reviews.  This reprint is available through Stencil Press and the series is “The Chronicles of the Tainted Gods.”  The first two books are already available here and here with the third scheduled to see release before the end of November. To view all Walter’s books on Amazon, click here.

If you’re interested in discussing some fantasy projects, come over and hang out with Walter at the Heroic Fantasy Facebook group.